The art at Jeløy Radio

The works of arts shall inspire, challenge and provoke in a positive way. At Jeløy, the art sometime interacts with the architecture – emphasising and intensifying it – other times contrasting the surroundings. The aim is to provide our guests with an exciting and distinctive environment. If the art also encourages guests to reflect on the surroundings and themselves in new ways, it’s great.

60 works of art by approximately 30 Norwegian and international artists are placed in the lobby, salons and meeting rooms. In the hotel rooms, you will find graphic prints by well-known Norwegian Artists.

The Telenor Art Collection is characterized by its focus on selected and important works of art. The Art Collection aims to embrace the complexity of our featured artists, and the works of art that are chosen can be representative of both the artist’s particular focus and their scope.

We hope you as a guest will be inspired, happy, perplexed and even a little provoked by the art at Jeløy.

The history of Jeløy Radio

Many of our finest treasures are often well kept secrets. Hotel Jeløy Radio is one of these – a little gem, surrounded by natural beauty and situated on a picturesque headland just of the Oslo Fjord.

The hotel building is steeped in history. In 1927, the Norwegian telephone company decided to build a shortwave transmitter at Jeløy. The building was completed in 1930 and the first transmitter, the “American transmitter”, was installed in November. 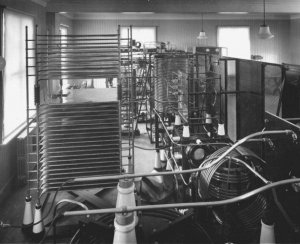 The old transmitters were water-cooled and took up a lot of space. The first transmitter alone took up most of the main wing. The building was therefore expanded with a side wing before the war, and another was added in the 1950’s.
Shortwave broadcasts peaked between 1950 and 1960. During that period, fixed point-to-point radio connections was established to North- and South America, Japan, China, Iran, the Soviet Union, Italy, Spain, Portugal, Germany, the Netherlands, Belgium and Poland.

In addition, three longwave transmitters were in operation. The Norwegian Telegram Bureau (NTB) sent newscasts to Norwegian newspapers and Iceland and the Faeroe Islands. The transmitter was in operation until 1977, when Haugesunds Avis was the last newspaper to receive news. Another was used by the Norwegian Meteorological Institute to broadcast daily weather reports.

Communications through shortwave was gradually replaced by cable during the 1970’s. The radio station at Jeløy was unmanned as of January 1st 1995. However the antennas are still intact and as recently as 2003, the Norwegian Ministry of Foreign Affairs used them to send information to Norway’s ambassadors abroad.
Today, only to maritime services remain at Jeløy Radio: DSC (Digital Selective Calling) which is operated from Tjøme Radio, and Nav-tek (navigation- and storm alert) operated from Rogaland Radio.

Jeløy Radio, the Telenor conference hotel, opened in May 1997. The idea came about after Tormod Hermansen was given a tour of the place some years earlier.
We are pleased to welcome our guests to a distinctive hotel, an imposing pearl in the style of functionalism, situated on a picturesque headland just of the Oslo Fjord, surrounded by heaven and sea.

This website uses cookies to improve your experience while you navigate through the website. Out of these, the cookies that are categorized as necessary are stored on your browser as they are essential for the working of basic functionalities of the website. We also use third-party cookies that help us analyze and understand how you use this website. These cookies will be stored in your browser only with your consent. You also have the option to opt-out of these cookies. But opting out of some of these cookies may affect your browsing experience.
SAVE & ACCEPT
Powered by